The thinner red curve is the caustic formed by light parallel to the y-axis reflecting in y=f(X). (The caustic is the envelope of the reflected rays.  The envelope of a family of lines is the curve which is tangential to the entire family).

I is the focus of this parabola.  What do you notice about Ias you drag J? 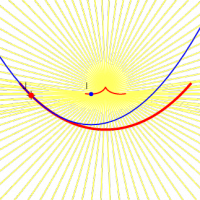