Five circles are centered proportionally around an ellipse according to functions of the variable r. Each circle’s radius is defined by the same function as its position, of r. Can you figure out the five functions of r which define the five circles? Download the .gx source for the answer.

Tip: if you press the ”go” button, r will animate at a constant rate and the ellipse will stay a constant size. If your drag the slider, note that the ellipse is not changing size or position, but the app is zooming in and out in order to display everything within its window most efficiently.

Hint: one circle’s radius and position are defined by f(r) = r. 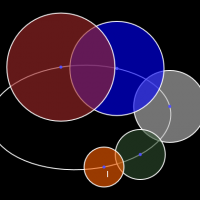